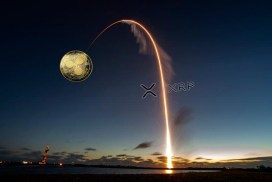 2019 ended with a rather disappointing sub-twenty cents per XRP, yet the good news continues to roll in with both utility and adoption trending skywards.

Join us as we take a look at the biggest factors we think could lead to an XRP price rally as institutional investment finally pours in.

This is not financial advice nor a price prediction, clearly, the market is heavily manipulated, however, there are a few triggers that could change price stagnation rapidly.

The internet of value that we are creating is very much coming to life, I can see blockchain technology merging into other core enabling technologies & together creating the fourth industrial revolution. We are really at front and center of that change with the work we are doing at Ripple & the way we are applying the blockchain tech, digital asset XRP & the interledger model to real-world problems & you can see in terms of the network growth and the impact how quickly we are changing and how quickly we are bringing that vision to life

Since September 2019 the US Federal Reserve has printed tens of billions of dollars trying to steer major global markets away from the looming catastrophic crash.

Many of the world’s most trusted financial analysts agree another financial crash is on the horizon, it could be in another few years it could hit tomorrow.

Some influential financial leaders like Christine Lagarde have expressed how damaging Brexit will be to the German and UK markets when Brexit is fully initiated.

Current global debt levels are simply not sustainable. Debt actually is sustainable if the debt is used for projects with positive returns & if the economy supporting the debt is growing faster than the debt itself. But neither of those conditions applies today. Low interest rates facilitate unsustainable debt levels, at least in the short run. But with so much debt on the books, even modest rate increases will cause debt levels and deficits to explode as new borrowing is sought just to cover interest payments. The increase in debt globally has already been larger, faster, and more broad-based since the Great Financial Crisis than in the previous three waves. This should be seen as a leading indicator for the possibility of financial crises ahead and shake up the complacency that is evident in macroeconomic policy making today with regard to increasing levels of both public and private debt

Bitcoin was born after the last financial crash which devastated millions of lives all over the globe and XRP was developed as its faster and more scalable successor XRP.

The general consensus says the next financial catastrophe will see money flood into Gold as it always has, but it will also flood into digital assets with real utility.

Bitcoin is now widely accepted as a safe store of value or Gold 2.0, XRP has its focused job of replacing the dated $5 trillion daily Swift system.

In May this year, the Bitcoin mining reward is programmed to reduce by half from twelve BTC per completed block to six to counter the effect of Moores law.

This event is expected to send its value to new all-time highs, some analysts believe BTC could reach between $20,000 $50,000, driving a new wave of FOMO.

Every 210000 blocks, the Bitcoin network undergoes a reduction fo the remuneration received by miners. The procedure is known as halving. Considering that miners spend about 9 minutes and 20 seconds on average to find a block, halving happens approximately once in four years. Initially, miners got 50 BTC for each discovered block. However, as a result of the upcoming halving, since 2020, they will get only 6 BTC for the same work.

While this is not XRP, during all previous price rallies, as interest soars for Bitcoin, so too does interest and investment in the ‘more affordable’ assets like XRP.

Many analysts feel the Bitcoin halving event has been factored into the price already, with so many conflicting stories it is hard to tell, but not too long to wait…

XRP’s moonshot is also held back by the SEC’s failure to give clear regulations on crypto trading, most mainstream investors will not touch unregulated assets.

Regulations would determine XRP is a security or a utility token as it is classed in the UK if it is a security then very different rules apply to investors.

Ripple has a long-standing relationship with US regulators and has worked with them right from the start, their transparency is much respected in regulatory circles.

Utility tokens: these tokens grant holders access to a current or prospective product or service but do not grant holders rights that are the same as those granted by
Specified Investments. Although utility tokens are not Specified Investments, they might meet the definition of e-money in certain circumstances (as could other tokens), in which case activities in relation to them may be within the perimeter. DLT can be described as a set of technological solutions that enables a single, sequenced, standardized & cryptographically-secured record of activity to be safely distributed to, & acted upon by, a network of varied participants. This record could contain transactions, asset holdings or identity data.

Amateur analysts say Ripple’s class-action lawsuit described below could force the SEC to rule XRP as a utility token as they intelligently decided in Britain.

One thing is certain, if the SEC had already ruled as not a security then the case would be irrelevant, it specifically says Ripple sold unregistered securities.

As the XRP was purchased from an exchange by the plaintiff rather than Ripple directly,  it is likely that the case will be dropped and dismissed rather quickly.

In 2019 we heard Ripple partners Moneygram and SBI’s eagerness to open up payment corridors all over the globe, focusing on the Indian and Asian financial markets.

When these corridors start to flow XRP volume will be orders of magnitude greater than it is today with access to literally billions of new users, some of those unbanked.

Indian remittance from overseas workers to families back home in 2018 broke £80 billion, which is by no means a small market and also the world’s largest.

With a growing global need not just for access, but more efficient, transparent and cost-effective payments into and out of emerging markets — new financial institutions have joined RippleNet: two banks and three payment providers that will expand reach in India, Brazil & China. Two fast-growing global remittance providers, Beetech in Brazil and Zip Remit in Canada, will both use xVia to open payment corridors for their customers around the world. Additionally, both will look to establish a connection for their customers into China, an opportunity that is now possible thanks to the recent addition of LianLian International to RippleNet earlier this month. InstaRem (Indai) is able to send funds to over 3 billion people around the world and has a growing customer base of over 40,000 businesses and individuals who rely on their services. By joining RippleNet, InstaRem will be able to provide a faster, cheaper and more transparent payments experience to every one of their customers.

Then consider the fact corridors are due to open in the Philippines and planned volume expansion in Mexico, positions three and four in the global remittance league.

Remittance position two, China, with 2 billion people it’s hardly a shock, what you may find surprising is the fact Ripple have held many talks with the Chinese already.

Not only that, SBI Chairman and XRP enthusiast Yoshitaka Kitao has managed to secure a chairman role within in the Chinese board of commerce.

If China also decides to use XRP to settle remittance payments then most of the $700 billion remittance markets will be settled by XRP and its price will be much higher.

As mentioned above, Brad Garlinghouse is due in court Jan 15th, 2020 to hear accusations that his company ‘Ripple’ sold unregistered securities in the state of California.

The general feeling in the XRP community and amoungst many trusted analysts is that this case will simply be dismissed due to the fact Ripple did not sell the XRP directly.

Although (Plaintiff’s) experience was an individual one, the lawsuit has been filed on behalf of all XRP investors who purchased tokens beginning in January of 2013 & after. This lawsuit does not mark the first of its kind, as the Securities and Exchange Commission (SEC) has launched probes into dozens of different ICOs in an effort to determine whether or not they meet securities offerings requirements. Ripple executives, on the other hand, maintain that XRP is exempt from this type of classification. They also pointed out that the company has “not been served.”

Whatever happens, there are major ramifications for Ripple, XRP and its price, it could skyrocket, it could tumble further but we should have some big questions answered.

We could also see zero price change as usual due to heavy manipulation but eventually, good news will be so powerful, whales and bears will be decimated and XRP explodes.

Big thanks to Ayden Trading for bringing us the video, fast forward to 39 minutes to hear XRP and RippleNet discussed minus the terms…